Whenever a new generation of processor gets released, the masses wonder what kind of upgrades this new generation has. The same also happens for processors. AMD Ryzen processors surprised everyone when it was first released back in 2017. AMD had not released any processors for a long duration. However, with the Ryzen lineup of processors it surprised everyone. Not only was it the latest, and greatest from AMD, but it also beat its competitor in terms of multi-threaded performance, by a large margin. What made it even better was the pricing. It was priced lower than its competitor, making it even more appealing. But, one department where it lacked was the single-threaded performance. But, with the newer generations, even that got fixed.

The latest AMD Ryzen series of processors launched is AMD Ryzen 5000 series featuring AMD Zen 3 architecture. With Zen 3, lots of improvements have been made when compared to Zen 2. These processors have excellent multi-threaded performance, just like the previous iterations. However, now even the single-threaded performance, and IPC have been improved significantly. In this article, we are going to discuss the performance of two highly popular Ryzen processors, the Ryzen 5 3600X, and Ryzen 5 5600X. The Ryzen 3600X is the best mid-range offering of AMD’s Ryzen 5 series of the last generation. The Ryzen 5 5600X is the new successor. But, what most of you are here for is to know what kind of difference does this new generation make. Well, in short, a lot!

The only way to know the difference between the performance of two different processors is benchmarks. That is what we are going to do. We would run the Ryzen 3600X, and the Ryzen 5600X through a wide variety of benchmarks to see how each of these perform in those scenarios. Spoiler Alert: The AMD Ryzen 5 5600X is better. Firstly, we would be doing benchmarks on some of the popular games. We would be using a RTX 3080, along with 32GB (16GB x 2) of 3200 MHz RAM to avoid any bottleneck issues. In terms of the gaming performance, the 5600X beats the 3600X by a decent margin. This is due to the massive improvements in IPC, and single-threaded performance that the new Ryzen 5000 series processors such as the Ryzen 5 5600X have. However, one thing to note here is that these improvements are only noticeable if a powerful graphic card is used. Without any further ado, let’s get started with the benchmarks. Firstly, it is Call of Duty: Modern Warfare 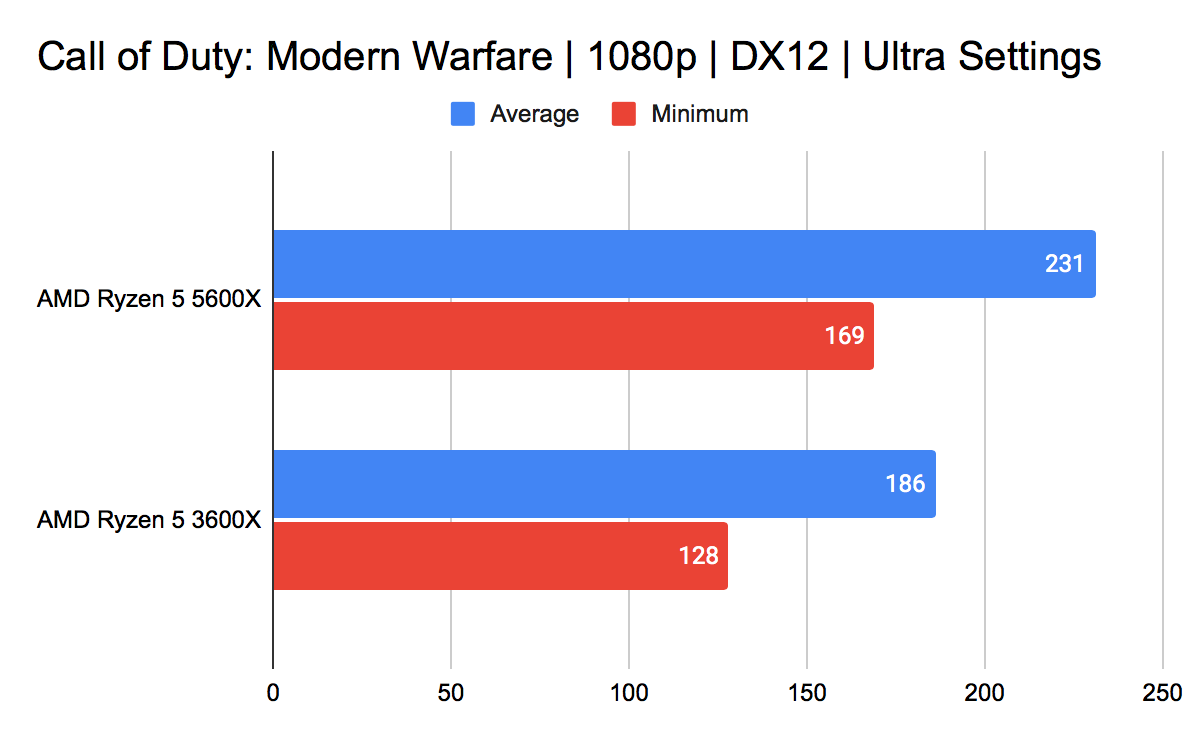 In Call of Duty: Modern Warfare the 5600X has a massive advantage over the Ryzen 3600X both in terms of minimum, and average frame rates. The difference that the new generation has over the previous one is very much significant.

Next up, on Horizon Zero Dawn, the story is very much the same with the Ryzen 5600X having a lot better frame rates.

On Tom Clancy’s The Division 2, the difference is not as much pronounced as the previous two games. However, in terms of minimum frame rate, there is still a difference of almost 28%.

In Hitman 2, the difference is yet again very high. If you have a powerful graphic card, then the Ryzen 5600X is an excellent buy.

That was it for the gaming benchmarks, now let’s talk about some synthetic benchmarks which will just measure the power of the processors. Firstly, we are going to do a Cinebench R20 test.

When it comes to 7-Zip Decompression, and Compression scores for a 32MB dictionary, the difference gap is substantial.

To conclude, the AMD Ryzen 5 5600X is better than the Ryzen 5 3600X in almost every way you can think of. However, one thing to note is that the Ryzen 5600X is significantly more expensive than the Ryzen 3600X. However, if you are ready to spend that additional amount, then the Ryzen 5 5600X is a clear recommendation. The difference in performance is just massive, and completely worth that extra money spent. However, when it comes to gaming, one thing needs to be kept in mind. It is the graphics card. The Ryzen 5 5600X will only outperform the Ryzen 5 3600X when a powerful graphics card is used. Anything below the RTX 3060, and there would be minor differences in terms of the framerates between the two processors. This is because, in that case the graphic card will be causing a bottleneck.

So, to sum it up, the Ryzen 5600X is in every way a better processor. However, it is only recommended if you can spend the additional money, and you have, or are planning to get a powerful graphics card for your PC.